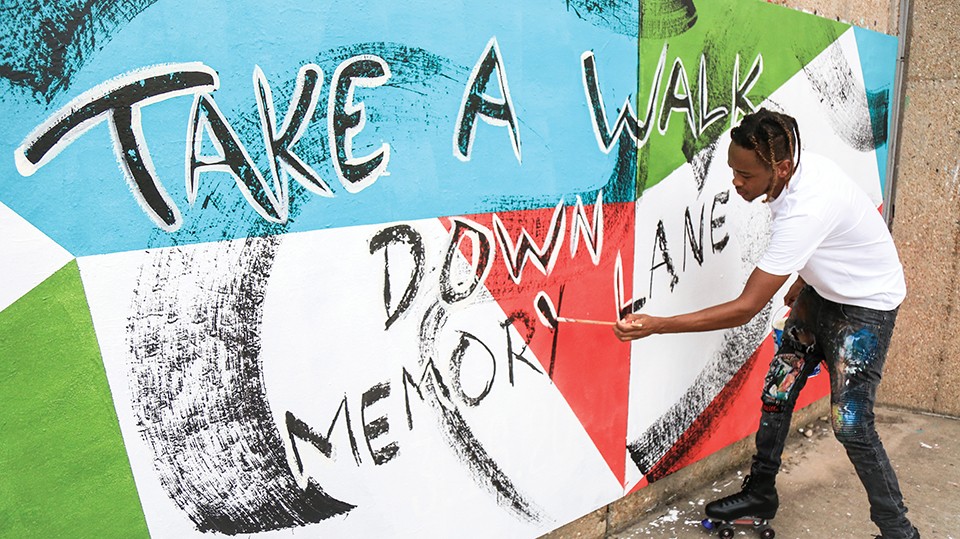 NICHOLAS COULTER – Brock Seals, on roller skates, works on one of the murals.

When Washington University selected art collector and artist De’Joneiro Jones to lead the painting of the South 40 Underpass on the Danforth Campus, he assembled a group of local talents.

Under his supervision, the artists transformed the walkway while subtly educating passersby about elements of art and various art movements throughout history with their own version of a 2020-styled public art display. The work as a whole might be described as a step beyond abstract expressionism into historical artistic activism. Each of the works spanning the 22 massive panels — measuring six feet high by six and a half feet wide — reflects the individual artists’ creative process, design and personal style. What is astonishing is that the project in its entirety was completed and documented in just eight days.

If you are familiar with the South 40 Underpass, a walkway that connects the main campus to the section where you find the bulk of student housing, you will first recognize some changes to the cube, sphere and pyramid grouping that sits at the north entrance of the underpass. The flowing paint of the sphere evokes images of the development from abstract expressionism to a style known as color field painting. (An example of this style is Morris Louis’ Beth Feh.) The painting of the sphere by local artist Brock Seals presents itself with a background of colorful, ribbon-like veins of flowing paint untouched by brush or roller yet representing the melting of our planet, the burning of our forests, the rising of our seas and an urgent need to end global warming.

The cube was painted by Jones to focus on the landmark Francis Olympic Stadium at Washington University with its historic reinforced concrete stands for the 1904 Summer Olympics and the medals won there. The gold and black pyramid was painted by Roland Burrow to remind us of “the golden calf and the powerful image of the pyramids.”

Upon entering the underpass, there is a Chadwick Boseman panel painted by Seals on the west wall. It reminds the viewer, in Boseman’s words, “The Struggles Along the Way Are Only Meant to Shape You for Your Purpose.” Boseman died August 28, 2020 at the age of 43. The internationally renowned actor played superhero Black Panther as well as historical figures such as Thurgood Marshall, Jackie Robinson and James Brown. Boseman continued to work while undergoing four years of treatment for colon cancer. Seals’ choice of the Boseman quotation speaks not only to the student population but also to the community as a whole.

The next series of panels was designed and painted by St. Louis artist Danny McGinnist Jr. The panels can be viewed as stand-alone panels or as a unit anchored by the portraits of George Coleman Poage and John Robert Lewis. Poage was the first African American track and field athlete to win Olympic medals in 1904 on what is now the university’s Francis Olympic Field. John Robert Lewis was a civil rights leader and longtime member of the U.S. House of Representatives. He helped organize the 1963 March on Washington and was a leader along with Dr. Martin Luther King Jr. of the marches across the Edmund Pettus Bridge in Selma, Alabama. Between these portraits of courage and power, McGinnist has painted images from his “Roots and Petals Series” that celebrate flowers with their rooted beginnings and emphasize their ability to grow strong and weather any storm, much like Black people “persevere through adversities to create our own legacies.” The central panels have a feeling of movement as the pollen that McGinnist painted floats across the surface of the painting, in keeping with how the commitment of Poage and the “good trouble” of Lewis led to change in the United States. Action painting was popular during a period following World War II when censorship of artists and the McCarthy era brought the need for abstraction to the foreground much like it is needed today.

The next panel is by Seals and includes a quotation by James Baldwin: “Not Everything That Is Faced Can Be Changed But Nothing Can Be Changed Until It Is Faced.” As the people of the United States look to the issues of the present day, such as race relations, the killing of unarmed Black men by the police, immigration reform, the caging of children, the COVID-19 pandemic, economic and food insecurity, and the opioid crisis, and as they attempt to find resolution and justice, Baldwin’s words still ring true.

The final panel on the west wall of the underpass is a serious artistic imitation of Henri Matisse’s The Dance. This mural panel was painted by Seals. The Dance IIby Matisse was a mural 15 feet high and 45 feet long that took two years to complete. The Dance I by Matisse is much smaller and was considered by Matisse to be a sketch for the mural. It was painted in pastel shades. As in the large Matisse mural, the dancers with hands joined are painted red. Yet in Seals’ mural the “blood red is meant to symbolize the blood being shed by Black people” according to the artist. The characteristic Seals brush strokes appear throughout and provide movement in the artwork. It is a companion panel to the Baldwin panel.

Traversing the passageway in its transformed state can be a powerful experience. As Katharine Pei, director of the First Year Center at Wash U, describes it, “We live in a time right now when everything is hard, and I feel like there is a change in the air, like a movement is happening. We have been in like an ivory tower for a while, but now I think there is a connection between the movement and the people, and the painting just really struck me. You feel something when you walk through here. The emotion is so strong, and I’m drawn to all of it. I think when you walk through this space it gives you an opportunity to think differently than you did before.”

On the east wall of the underpass are two panels by Damon Addison. The first is representative of a Black female athlete reaching for the stars. It is intended to be “simple in message and design” according to the artist.

Addison’s second panel is a collection of images that depict urban life in St. Louis and are reminiscent of the Ashcan School. That style of art, from before World War I, simply showed the good parts of city life and skipped the unpleasant nature of poverty. The works of this movement were intended not as social commentary but aimed to show the positivity and vibe of an urban environment. Addison handled this by selecting prominent St. Louis African American leaders such as Homer G. Phillips and Annie Malone to place in his panel.

Malone was the first Black female millionaire. She was a chemist, entrepreneur and philanthropist who used her wealth to promote the advancement of African Americans. The Annie Malone Children’s Home opened in 1888 and still addresses the needs of children and families at risk and in crisis in the St. Louis area today.

Phillips was a lawyer and politician who secured a $1 million loan to build a hospital for Blacks in segregated St. Louis. It was the first hospital with teaching capabilities for Blacks west of the Mississippi River. The hospital opened in 1937 and operated until 1979 — even though Phillips was murdered in 1931, a case that remains unsolved.

Also depicted in Addison’s artwork are tools and the stages of metamorphosis from caterpillar to butterfly. Addison’s hope is that people will have a metamorphosis from violence through the use of the tools he includes, such as a book, a pencil, a mask for COVID-19 protection and scissors. The emphasis is on mental awareness of how important the simple basics of life — such as eating healthy, resting and love — are to all humanity.

Jones himself displays multiple works as part of the mural project under his supervision. Besides the Olympic cube, there is a panel on the east side of the north entrance, while another of his panels is located on the east wall of the underpass. It is in this final panel that Jones’ abstract freestyle works combine with collage technique to create a message of social justice, the need for informed public policy and the significance of the highs and lows experienced in life. He describes the mixture of paints in his work as “a cacophony of colors” and the words in his painting as “waterfalls of justice and humanity with the basic principles for how man treats his fellow man being unity, family, faith and charity.” Jones uses the element of line to represent emotional movement — from peace and tranquility to anger and rage and a return to a new normalcy through individual and societal change.

In many ways, abstract expressionism has given voice to Black artists as a response to what has become systemic racism in the United States. This includes the murders of Malcolm X, Dr. Martin Luther King Jr. — and so many murders of unarmed Black and brown men and women, including Trayvon Martin, Breonna Taylor, Manuel Ellis, Atatiana Jefferson, Charles Roundtree Jr., Philando Castile, Sandra Bland, Freddie Gray Jr., Tamir Rice and Michael Brown Jr. among others. Since the slaying of Brown, Jones, who was recommended to organize and implement this entire mural project by Wash U Vice Provost Adrienne Davis, has placed the memories of the slain in the heart and soul of his art with the intention of seeking justice for them and an end to the reasons underlying the violence.

Burrow designed and created the panels of the mural located on the south part of the east wall of the underpass. This artwork depicts a unity of purpose between multiple races and beliefs with the American flag waving in the background. He begins the first panel with a meditating figure, half Black, half white, transcending race and freeing the mind to a metaphysical state of consciousness. In the next panel Burrow places emphasis on positivity with the portrait of a brown-skinned child reading from a book. The book has gold pages and a regal cover that suggests that the way to knowledge, wealth and power is through study and learning, science and fact. This recalls the idealized views of regionalists as opposed to social realist painters, and Burrow’s waving flag invokes Jasper Johns’ rigid Three Flags. Burrow’s art also reflects the style of a precisionist. From an early age Burrow spent time drawing, and his artwork reflects this training. Those who were fortunate enough to see the artist at work on the mural noted how detail oriented and carefully constructed Burrow’s work is. (More on the art of Roland Burrow can be found at www.mccaughenandburr.com/artists/burrow-roland/.)

One final panel that deserves the utmost respect and gratitude of all those viewing this project is a portrait of Robert Lee Williams II by Seals. Williams was a professor emeritus of psychology and, more importantly to this project, the founder and first director of the African and Afro-American studies program at Wash U.

To visit this display of public art, head to the South 40 Underpass located just south of the Francis Olympic Field on the Danforth Campus of Washington University.